Is Butter or Margarine better for my health?

Is Butter or Margarine better for my health? 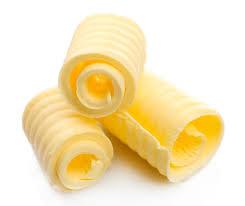 So why Butter Not Margarine?

To try and understand the facts around this issue, it's useful to go back in history to see where the idea that margarine might be better for your health than butter came from. Most of the confusion started with the publication in 1977 of the report "Dietary Goals for the United States". The key recommendations from this report were that people should increase carbohydrate consumption, reduce fat consumption, particularly of saturated fat while increasing their intake of polyunsaturated fat. The report also recommended a reduction in consumption of cholesterol, sugar and salt.

This report was followed by a 1992 Food Guide Pyramid which recommended that fats and oils should be used sparingly and that the biggest proportion of your diet should come from the bread, cereal, rice and pasta group - in other words high carbohydrates and high levels of gluten.

Since the publication of these two reports, there has been a massive deterioration in the health of the American people and people around the world - this was the beginning of the epidemics of obesity, diabetes, dementia and related conditions, which are happening now.

There are four key arguments that support the idea that using butter instead of margarine will enhance your health.

The Safety of Saturated Fat

A recent research review has shown that the demonisation of saturated fats was NOT supported at all by the research data that was available to the Congressional Panel in 1977, at the time that they came up with "Dietary Goals for the United States".

There have now been several reviews of all the studies done over the last 40 years about the health consequences of dietary saturated fats. These have all shown that a higher intake of saturated fats is not associated with increased risk heart disease, stroke, diabetes or death from any causes. This is contrary to the prevailing dietary advice you will get from most sources, which is not based on what the research data shows!

The Safety of Dietary Cholesterol

Elevated blood cholesterol is actually a response from your body to stress because cholesterol is the building block for your stress hormone cortisol. So in response to long-term stress, your body starts making more cholesterol, so that it can then make more cortisol because without adequate cortisol you die.

The reality is your body needs cholesterol because;

It is the key component of the cell walls that provides the stiffness necessary for the correct function of your tissues.

It's required at high levels in your brain, in fact, your brain contains 25% of the cholesterol in your body.

Cholesterol is also the precursor to the other steroid hormones in your body, most notably your sex hormones and Vitamin D.

A large study done on Swedish woman of a wide age range showed that the risk of death from all causes (and cardiovascular disease) declined as their total cholesterol levels went up. There are other studies that support the same conclusion that reasonably high levels of cholesterol reduce your risk of death. Higher levels of cholesterol also reduce the risk of mental conditions such as depression, dementia and Alzheimer's disease.

The latest research has shown that it is only the very small particle size LDL cholesterol that is a risk factor for heart disease and your body makes this type of cholesterol in response to higher sugar levels, not animal fats. A low-fat diet not only increases your amount of small particle LDL, but it also reduces the amount of heart-protective HDL cholesterol, so increasing your fat intake and eating low glycemic index foods are an important tool for increasing your heart and overall health.

Your Omega 6/will Omega 3 Balance

Your genes evolved on a diet that had roughly equal amounts of the two essential fatty acids Omega 3 and Omega 6 and your genes have changed by a minuscule amount of the last 10,000 years. The 1977 report "Dietary Goals for the United States" recommended increasing the intake of Omega 6 fats, which gave the fledgeling vegetable oil industry the green light to produce huge amounts of refined Omega 6 oils which are now widely used in processed foods and dominate the supermarket shelves.

The effect of this explosion in Omega 6 oil consumption has meant that most people have somewhere between 10 and 30 times more Omega 6 in their body than they have Omega 3 – a very long way from the desired 1 : 1 ratio which your body evolved on.

The health consequences of this imbalance are profound and are summed up in the proceedings of a scientific conference on the subject.

"A higher Omega 6/Omega 3 ratio is associated with increased risk of coronary heart disease, colorectal cancer, asthma, osteoporosis, arthritis and neurodegenerative diseases and various aspects of mental illness, violent behaviour and deficient cognition in both children and the elderly."

This compares very favourably with the butter from more intensive farming systems where the cows are fed lots of oilseed residues and other concentrates containing Omega 6, which gives the butter an Omega 6: Omega 3 ratio of around 7 : 1 to 10 : 1.

Grass-fed butter also contains usefully higher concentrations of vitamin A, vitamin D and vitamin K 2 (important for calcium metabolism) and also a fatty acid called CLA, which has been shown to help with weight loss.

Margarine, on the other hand, is typically made from cheap Omega 6 oils, such as soybean or cottonseed oils. Typically this gives them an Omega 6 content of around 25%, with little or no Omega 3. There are some margarine available which contain some olive oil, which does reduce the Omega 6 content, but they still have a very high Omega 6 : Omega 3 ratio and contain damaged fats.

Margarine is made from vegetable oils that have been processed by the addition of hydrogen to make them into a solid or semisolid spread. The issue for your health is that this process creates trans fats or damaged fats, which can sit on enzyme sites in your cell and block the access of real fats to the enzymes. Trans fats have been shown to be seriously damaging to your health, in particular, heart disease, inflammation, insulin resistance and risk of diabetes.

The partial hydrogenation method used to make much margarine involves bubbling hydrogen through an Omega-6 or 9 oil (i.e. soybean or olive oil) at high pressures and high temperatures (120 - 240 oC) in the presence of an aluminium/nickel catalyst (leaving residues of nasty heavy metals in the product).

Hydrogenation attacks the double bonds present in both Omega-6 and 9 oils in a random fashion, potentially either - shifting them along the molecule, rotating them into trans fats or clipping the molecule into fragments. The potential number of different molecules made by this random process is staggering and has never been fully characterised.

Partial hydrogenation can create very high levels of trans fats, so read your labels and try and avoid processed foods containing partially hydrogenated oils – many of them do.

Because of the trans fat problem that occurs with partial hydrogenation and the damage, this does to the image of margarine, many margarine manufacturers now use a method called interesterification to make margarine with lower levels of trans fats.

This involves complete hydrogenation of an Omega-6 or Omega-9 oil, which means the damaged fragments of fat created by the hydrogenation process are still present.

The resulting solid fat is then mixed with an Omega-6 or Omega-9 oil in the presence of enzymes or catalysts to modify the structure of the blended oil into molecules that do not normally exist in nature, but which give the right texture.

Does this process make a margarine that is any better for your health? - recent evidence suggests not.

The first longer term human study showed that after only four weeks on a diet with a high proportion of interesterified margarine, there were substantial adverse health effects. Fasting glucose was raised by 20%, to a level considered pre-diabetic and insulin production was reduced. This diet also reduced the HDL: LDL ratio in a similar manner to Trans fats.

A recent study on dietary influences on IQ turned up a surprising connection: children who ate margarine regularly scored significantly lower on intelligence tests than their peers. The study was conducted by researchers from Auckland University in New Zealand and published in the journal Intelligence.

The researchers found that children who ate margarine daily scored three points lower on IQ tests by the age of three-and-a-half than children with lower margarine consumption. By the age of seven, the average IQ scores of some margarine eaters were six points below those of their peers.

A recently published Australian study looked at the effects of increasing omega 6 intakes on 458 men who had had a recent heart attack. They were asked to increase their Omega 6 intake to 15% and reduce their intake of saturated fat. They were given safflower oil and safflower margarine to help them achieve this.

As expected, they had a significant reduction in total and LDL cholesterol content, which most people would assume would lead to a reduction in the risk of heart disease. The reality was those eating a higher omega 6 level, some of it from margarine, had a higher risk of dying from or any cause, including heart disease. The authors also reviewed all the published intervention trials where Omega 6 oils replaced saturated fat and found no evidence of benefit.

So why does The Heart Association, and likely your doctor, still promote the idea that you should increase your intake of polyunsaturated fats (omega 6) and use margarine? We know that the latest science shows that this advice actually increases your risk of heart disease – you could speculate for hours as to why this is so, but this doesn't change the fact that substituting margarine for butter is a really bad idea for your health.

If you are not convinced, try this little experiment - take a lump of butter and margarine and put them on a plate somewhere accessible, but out of the sun.

When I did this, it took three days for a mouse to find them and eat all the butter. When I threw the "olive oil" margarine out 3 months later it was still sitting there totally inert - the mouse wouldn't eat it, insects hadn't touched it and no fungus had grown on it. In other words, IT IS NOT FOOD - there are no enzymes in nature or in your body to digest it.

Since your body uses whatever fats are in your blood stream to make the cell walls of the billions of new cells it makes daily, eating bad fats like margarine is going to affect many bodily processes.

So go and enjoy a moderate level of grass-fed butter in your diet - I do (well according to my family it's not a very moderate amount at all - they have accused me of having toast with my butter).

Tip of the day: You can make very healthy soft butter by combining a softened 500 g pack of butter with a 250 ml bottle of Flax Original in your food processor. Store in the fridge, preferably in a light-proof container.