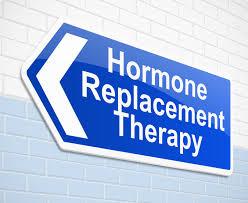 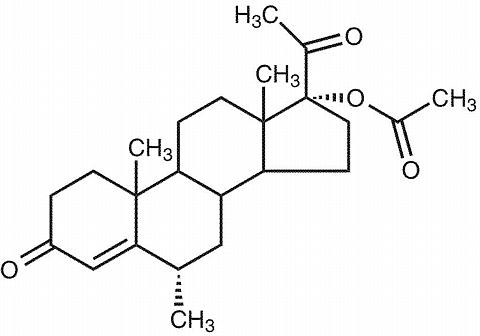 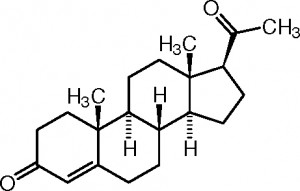 The molecular structure of Natural Progesterone and medroxyprogesterone, the progestin used in Prempro, the HRT drug tested in the WHI trials.

While they look very similar (which is why they have similar effects in your body), the small differences are the bits that cause the undesirable side effects because they are foreign to your body.

The use of HRT (Hormone Replacement Therapy) drugs like Premarin to treat menopausal symptoms is based on the idea that because your oestrogen levels decline during menopause so that supplementing your body with synthetic oestrogens will reduce the symptoms.

HRT to reduce the side effects of menopause has now been in use since the 1940’s. The first form of HRT was extracted from the oestrogen rich, urine produced by pregnant mares – Premarin (synthetic oestrogens only), which was used to supplement menopausal woman’s depleted oestrogen levels. By 1975, evidence was starting to emerge around the health risks of HRT, with the publication of a number of papers starting to flag increased risk of endometrial, uterine and breast cancer.

This led to the idea that adding synthetic progestins to oppose the oestrogen might be a safer alternative and by 1995 Prempro (synthetic oestrogens and progestins) was launched.  By 2002 the Women's Health Initiative study using Prempro showed that the long-term use of HRT has an increased risk of strokes, heart attacks, blood clots and breast cancer. The Premarin arm of the WHI study carried on until 2004, but it was also terminated due to indications of increased risk of stroke, deep vein thrombosis and without benefit in terms of coronary heart disease. These findings slashed the use of HRT, but 12 years on, HRT formulations made from the urine of pregnant mares, such as Premarin and Prempro are still being widely used by many women, albeit for much shorter durations than they used to.

One of the key principles of organic farming is that animals should be allowed to exhibit their natural behaviours, which in the case of horses means being able to run and graze on green grass. As a long-term organic farmer, it really angers me the way the mares having their urine harvested are treated. For about nine months they are kept continuously inside in stalls too small for them to turn around in, so their urine can be collected by bulky tubing attached to their bodies at all times.

The tragedy of it all is that there is a much smarter way to minimise menopausal symptoms that do not have a string of nasty symptoms attached to it and does not require the maltreatment of horses to make it. This is because of the fact that the drop in your progesterone levels during menopause is proportionately much greater than the drop in oestrogen.

Thus a very effective alternative to synthetic drug use during menopause is provided by natural progesterone, which is biologically identical to the progesterone produced by your own body, but it is synthesised directly from vegetable sources.

In one natural progesterone study of a menopausal woman, 68 % were experiencing hot flushes at the beginning of the trial and after a year, 83% of the progesterone group had stopped the hot flushes, compared to only 19% of the control group. Another large-scale study in France showed that compared to the control group, who had not used HRT, the group that used Prempro had a 48% increase in the risk of breast cancer. In dramatic contrast, in the group that just used natural progesterone cream, their risk of breast cancer was the same as those who did not use any HRT.

In New Zealand and Australia, a doctor’s prescription is required for you to get natural progesterone. Some doctors are reluctant to prescribe this for menopausal symptoms because they are not aware of the research that has been done. In an attempt to remedy that situation, I have collected together all the research studies that I can find and put them together into a FREE E-Book that you could discuss with your doctor if you feel you need some support with your menopausal symptoms.

The other neat thing about progesterone is that it's the happy hormone for women – much more on that in my soon-to-be-published book ‘Take Charge of Your Happiness, Belly Fat and Sexiness – A Woman's Rapid Reset for Body, Mind and Hormones’.

If you would like a free copy of the e-book just email info@fwf.co.nz with Natural Progesterone in the subject line.

There is currently a petition called “Stop the manufacture of Premarin” at www.change.org if you would like to do something to help stop this animal abuse.