Where does the myth that saturated fat is bad for you come from?

Where does the myth that saturated fat is bad for you come from? 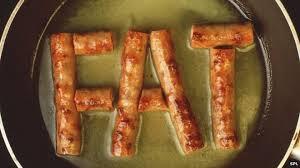 Is Saturated fat bad for you?

To find the answer to this we have to go back about 50 years ago, when a researcher called Ancel Keys started collecting data on 22 countries from the FAO National Food Balance data and statistically relating that to their national statistics on the causes of death including heart disease and death from other causes.

The most famous graph (shown below) that came out of this statistical analysis was where he cherry picked the data from six countries which happened to show a very close relationship between deaths from degenerative heart disease in men and the percentage of total calories coming from fat. He has been widely criticised for not including the available data from another 16 countries in the graph and indeed when this data is included the relationship does get a lot more fuzzy, but it is still statistically valid.

Does this mean that having a high-fat diet makes you die younger, absolutely not. 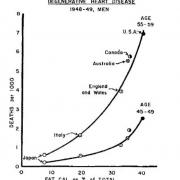 In fact if you take the same data set and graph the average life expectancy of men in 1950 against their fat intake you find that once their fat intake as a percentage of total calories goes over 30%, their life expectancy goes up. I am just trying to briefly illustrate the point that such data gives us no clue about the cause and effect and in fact is probably more of a reflection of the GDP (gross domestic product) per capita, which gives you a similar shaped graph when you graph it against percentage fat intake. So basically that graph was really bad, but very influential, science.

The problem arose when Ansell Keyes started to use this and other such data to fuel a campaign to demonise saturated fat. In another major twist to the bad science around fats story, it emerged in an article published in 2016 in JAMA Internal Medicine, that in internal documents from the 1960s, that the sugar industry became concerned about the increasing evidence of sugar's possible role in heart disease. The industry funded, Sugar Research Foundation, decided to sponsor (pay for) a study by several Harvard scientists to review the literature from a variety of studies and experiments on heart disease. The review was published in the New England Journal of Medicine in 1967, with no disclosure of the sugar industry funding behind it. The review suggested that there were major problems with all the studies that implicated sugar, but did not apply the same standards to those implicating fats. So they were able to conclude, “that cutting fat out of American diets was the best way to address coronary heart disease.”

The publication of these two pieces of bad science had a lot of influence on the thinking of that time, when people were searching for answers as to why the incidence of heart disease continue to increase. This led up to even more bad science when the 1977 US Congressional Committee, chaired by Senator George McGovern published “Dietary Goals for the United States ”. This report recommended that people eat a low-fat diet and particularly avoid saturated fat, as this was thought to be a significant cause of heart disease.

As you can imagine, with this being official US Government Policy there was substantial funding to conduct research around these ideas. Unfortunately, subsequent studies have failed to show a link between saturated fat intake and heart disease or any other degenerative disease.

What is worse, is that a very recent analysis of all the research available at that time to guide this Congressional Committee into making these recommendations showed that even in the 1970’s there was zero evidence showing that increased saturated fat intake was linked to increased risk of heart disease.

So saturated fat never has been, and never will be actively bad for your health. It's generally not particularly good for you either; it's just a neutral to mildly beneficial fat that should be eaten in moderation because it's a very concentrated form of energy.

The whole idea that for your health's sake you should eat more carbohydrates and less fat is scientifically just plain wrong. When you actually look at the research data, the data supports the idea that if you eat fat, you get thin (and reverse heart disease, and type II diabetes, while preventing dementia, cancer, and other disease processes). The reality is that, within reason, the higher the proportion of fat in your diet, the more fat you lose and the better your body functions.

Since the publication of the politically motivated reports mentioned above, there has been a massive deterioration in the health of people in America and all around the world. These reports triggered the beginning of the epidemics of obesity, diabetes, dementia, and related conditions, which are happening now.

There have also been several reviews of studies done over the last 40 years about the health consequences of eating saturated fats, which have all shown that a higher intake of saturated fats is not associated with increased risk of heart disease, stroke, diabetes, or death from any causes. A recent Norwegian study concluded that “people who eat a lot of saturated fat are less likely to suffer from heart problems, and instead, have much healthier bio- markers, such as improved blood pressure, cholesterol, insulin and blood sugar levels”.

This is contrary to the prevailing dietary advice you will get from most sources (including the NZ Health Star System), which are manifestly not based on what the research data shows!

These ideas are explored in much more detail in my soon-to-be published book “Take Charge of Your Happiness, Belly Fat And Sexiness – A Working Woman’s Route to Wellness”